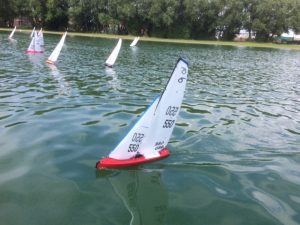 Glorious summer sunshine greeted the 20 skippers who had travelled to Birkenhead for Round 5 of this year’s travellers series for the RG65 class on Saturday the 23rd of July.
With little in the way of wind at the 10.30 start time, PRO Bill Culshaw offered a slight delay to tweak the course and racing soon got underway in the lightest of A rig conditions. With many skippers within the fleet sailing new designs for the first time in this emerging class there was plenty of interest on how these would shape up against Nationals runner up John Tushingham from Keighley and local skipper Brad Gibson fresh back from events in the IOM and Marblehead class.
From the outset it was Gibson who took charge of the day to go on and score a strong win by racings end at 4pm after 12 races were completed. John Tushingham remained steady for his second placing with Mark Dicks filling out the top 3 with some consistent scores.As can be seen in the results there were many skippers who recorded fine individual placings but lacked the required consistency to move that bit higher up the leader board. Of those skippers both Roy Stevens, Noel Donaldson, John Brierley and Victoria Gibson were often mixing it up at the front end.
By and large, skippers enjoyed the at times testing light winds and roundly thanked the Birkenhead Radio Sailing Clubs race team.
Full results and pictures on the Birkenhead RS & PC website HERE
Attention now turns to Round 6 of this years RG65 series to be held at the Two Islands club at Milton Keynes on Saturday the 13th of August.
Share this
Related Articles